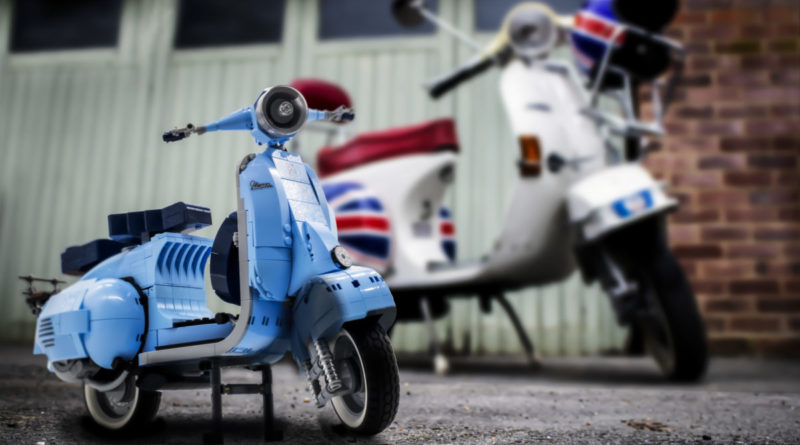 First created in 1946 by Italian motoring company Piaggio, the humble Vespa is as much an Italian automotive icon as Ferrari or Lamborghini. Sure, the scooter is not as sleek or fast as its supercar counterparts, but it exudes a style, elegance and class all of its own.

For over 75 years, Piaggio has continuously updated the Vespa’s models – but all the while maintaining the distinctive look and colours that made it such a fashion icon decades ago.

The LEGO Creator Expert series isn’t known for its recreations of two-wheeled vehicles – in fact, 2019’s 10269 Harley-Davidson Fat Boy was the last set to do so. But with its sleek curves, classic styling and iconic detailing, 10298 Vespa 125 should make for the perfect model to attempt to repeat the winning formula.

Inside the LEGO for Adults-branded box (that’s our subtle way of saying the box art is once again all black) are six bags that contain the 1,106 pieces needed to complete the scooter, along with a sticker sheet to add extra detailing and an instruction manual with some beautiful imagery, showing the timeline of Piaggio Vespa and – in particular – the 1960 model that this set is based on.

Unlike a lot of the four-wheeled vehicles in the Creator Expert theme, the first stage uses very little if any Technic elements to make up the frame, relying instead on a variety of System parts. It’s a really enjoyable start and it’s always a pleasure to watch a model of this size begin to take shape using nothing but regular bricks and pieces.

The pastel blue colour scheme (also known as bright light blue) is extremely authentic, as it was a very popular colour choice for this particular model of Vespa. It adds an incredible level of accuracy and style to the model along with a touch of exclusivity, as this colour is very rarely used. Custom builders and parts collectors will be in their element (pun intended) as there are over 70 types of pieces in this rare colour, including a multitude of parts that appear in bright light blue for the very first time.

Also marking a first for a LEGO set are the wheels, appearing here in two colours, black and white, for the very first time. They look absolutely fantastic and add yet another layer of accuracy.

As expected with a Creator Expert vehicle of this size, the build contains an assortment of smartly-designed sub-assemblies that fit together in unique and enlightening ways. The seat arch is a wonderfully complex assembly that connects via three hinge plates, allowing it to slot in at just the right angle, while the way the two front panels attach to the main frame like a giant jigsaw piece is incredibly satisfying.

The technique used to connect the two halves of the front wheel rim is similarly inventive: a small square sub-assembly is surrounded with 1×1 and 1×2 inverted brackets that allow the two larger assemblies to sandwich together. Even the rear seat is well-designed, including two left and right 1×2 wedges that create a small ridge at the back – just like the real thing.

Compared to how authentic and accurate these sections are, it’s a shame that the front seat isn’t quite as good. 2×2 slopes are used across the sides, creating a much blockier look, whereas curved slopes would have given a smoother finish. It’s a small gripe but once you’ve noticed it, it becomes more obvious, drawing the eye away from the well-crafted shaping of the rest of the model, and instead focusing on the one negative of the set.

No model can be perfect, though, and when taking into consideration how well the rest of the set comes together, the faults can be overlooked.

The attention to detail on this model is second to none. The footrests include the three small grooves that are present on the real-life Vespa, built using 1×8 modified plates with door ridges. The side panels, handlebars, kick-start lever – ingeniously built using a dinosaur tail, which appears in light grey for the first time – and even small details like the front suspension have been expertly recreated, using drum-lacquered silver 1×1 round tiles on either side.

And, for anyone who has owned a Vespa and found themselves having to tinker with the engine (FYI: that’s every single Vespa owner ever), you’ll find that even the engine has been accurately designed.

The included accessories – a rear rack, bouquet of flowers, basket and a traditional open-faced helmet – are just as smartly-designed as the rest of the model. They add an extra layer of detail and, aping the approach of 10290 Pickup Truck, a human touch to the model, bringing the whole set to life.

The Vespa has such a classic look that’s endured for well over seven decades that recreating its rounded, almost organic shapes, as well as its iconic features, is something the designers simply had to get right. Too square or blocky and the model just wouldn’t look good at all.

Thankfully, the LEGO Creator Expert design team have a long and storied history of accurately recreating  even the most challenging of motoring shapes, and even though they allude to the challenges faced while designing this particular model, 10298 Vespa 125 is another class entry into the portfolio.

10298 Vespa 125 is a far larger model than minifigure scale and, in-keeping with similar sets, includes no minifigures.

Comparing 10298 Vespa 125 to its closest counterpart, 10269 Harley-Davidson Fat Boy, the price feels fair – and also in step with the rest of the Creator Expert vehicle line-up. This Vespa has slightly more pieces than the Harley, is ever so slightly bigger and, taking into consideration inflation, it is pretty much the same price too. All in all, it’s another quality Creator Expert vehicle at a retail value that seems more than reasonable.

10298 Vespa 125 is a faithful and accurate rendition of a super-stylish scooter, the popularity of which has endured ever since the first model rolled off the production line back in the 1940s.

The attention to detail is very impressive, the design techniques are enjoyable to construct, the colour scheme gives the whole set a very unique feel – both to build with and to look at – and overall there are very few faults that can be found within the entire set. It’s not the most complex of builds in the Creator Expert vehicle line, but it’s nonetheless entertaining to put together.

Vespa enthusiasts will absolutely love this set, and will no doubt be impressed with how authentic the end result actually is, while it’s also a quirky enough entry in the Creator Expert line-up to tempt even those with little interest in the scooter itself. To sum it up, there is no better phrase than simply molto bello.

There are six sets of numbered bags to work your way through in 10298 Vespa 125, and you can expect to take around two and a half to three hours to complete them.