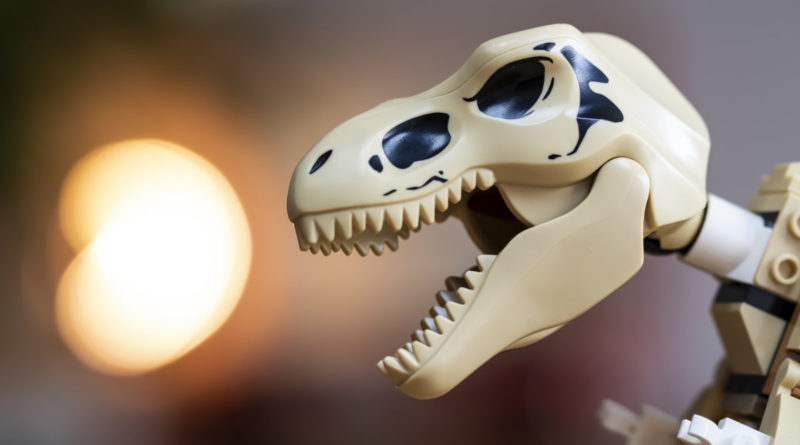 The LEGO Jurassic World theme brings something entirely new to the table for 2021 with 76940 T. rex Dinosaur Fossil Exhibition – a halfway house between play and display.

76940 T. rex Dinosaur Fossil Exhibition marks a real departure for the Jurassic World theme, offering fans the chance to get up close and personal with a dinosaur – albeit in fossilised form – rather than escaping from or trying to catch them.

The fossil exhibit features a portable work station, complete with samples and diagrams, a super-cute baby Triceratops, and an impressive T. rex fossil. On first glance it appears to be a different yet very appealing set, but will we still say the same once we’ve picked the bones out of it?

The first thing to tackle is the small work station side build. It’s made from just a handful of parts, but it’s packed with detail, featuring a dinosaur egg, T. rex claw (or bone of some sort) and a small plant leaf – whether this is for studying or feeding to the baby Triceratops is up to your own imagination. The fossilised T. rex diagram sticker rounds off what is a simple yet effective build.

The main focus of the set is the large T. rex fossil that makes up the exhibition, and is built from a mix of basic elements and recoloured pre-existing moulds atop a display plinth. It’s a simple build – as is to be expected with a set that’s recommended for ages 7+ – but the stud-less finish still makes for a smart looking base for the T. rex fossil.

The fossil itself comes together in quite a pleasing way. The colour scheme of tan, dark tan and white looks authentic, perhaps more so than LEGO Ideas 21320 Dinosaur Fossils’ all-white assembly. This may be a set aimed at a younger audience, but that doesn’t mean it’s not enjoyable for older fans, too.

The inner core begins life looking more like some sort of speeder from Star Wars rather than the remains of the largest predator that ever walked the Earth, but it’s not long before the assembly starts to take shape, with clips and bars used to attach the front appendages, and 1×2 modified tiles with vertical teeth used to recreate the vertebrae.

The ankle sections and feet look authentic to a real fossil display, the exposed joints looking a bit like the metal connectors you might find in a museum, and the moveable claws offer a little bit in the way of displayability. The thigh bones lack that same level of accuracy, however, made from just a single tan 2×4 tile. Compared to the rest of the curves, lines and angles of the skeleton it just looks too unrealistic and sticks out against what is otherwise a simple yet excellently-designed skeleton.

The recoloured T. rex skull also looks good, replicating an actual skull extremely well. The use of the pre-existing mould keeps the skeleton in-universe, tying this set together with existing sets in the wider Jurassic World theme – more so than had it been brick-built like the rest of the model.

Two minifigures are included within the set: the ubiquitous Owen Grady, who appears in almost every single Jurassic World set and remains practically unchanged from his 2018 variant; and Darius, who comes with two new elements – a torso printed with a yellow hoodie, white t-shirt and dinosaur tooth necklace, and a double-sided face, though these also appear in 76942 Baryonyx Dinosaur Boat Escape.

The printing on the minifigures is decent enough, but their alternative face prints just don’t suit the set at all. Owen Grady’s determined, stoic expression feels more at home in an action-packed playset; here he just looks baffled by all the science around him.

Likewise, Darius’s screaming, frightened appearance just looks completely out of place – what on earth could be so frightening in a fossil exhibition? The dinosaurs have been dead for millions of years.

It can’t be the baby Triceratops that’s given Darius the chills, either, as it’s quite simply adorable. It’s a pre-existing mould, but has been recoloured from olive green to sand blue, which offers up a unique look for this set.

76940 T. rex Dinosaur Fossil Exhibition is, by its very nature, a display piece. With that in mind, it does seem ever so slightly expensive. Once built it probably isn’t going to offer the longevity that some other sets will.

That said, it does look excellent once placed upon a shelf, and this year Jurassic World sets have gotten a lot more expensive for what they offer, so comparatively this is actually quite reasonable.

76940 T. rex Dinosaur Fossil Exhibition is an unusual entry in the Jurassic World theme. It’s a much more sedate and considered set than the more common dinosaur play sets that fans have become accustomed to. Its lack of play features might put a younger audience off, and older fans will not find the build as detailed or involved as the more mature LEGO Ideas 21320 Dinosaur Fossils.

However, its sheer uniqueness among the theme makes it stand out. Despite its shortcomings, there’s no denying it’s still an inventive and enjoyable set to put together, it looks excellent once complete, and the stylised display factor of the model will surely appeal to fans of all ages.

This set was provided for review by the LEGO Group.

Support the work that Brick Fanatics does by purchasing your LEGO Jurassic World sets using our affiliate links. Thank you!

76940 T. rex Dinosaur Fossil Exhibition takes approximately half an hour to build across three sets of numbered bags. The build is straightforward yet enjoyable, and the end model looks pretty effective.

How many pieces are in LEGO Jurassic World 76940 T. rex Dinosaur Fossil Exhibition?

76940 T. rex Dinosaur Fossil Exhibition is 29cm long, 13cm tall and 9cm wide. It’s not particularly large, but this is a positive as it makes it easy to display on even the smallest of shelves.